MindMeister 7.2 for iOS is now available on the App Store! In this latest update for our mobile mind map app we’ve added multi-tasking drag & drop support for images and text on iPad, as well as the possibility to move maps into folders on your iOS device, either via dragging and dropping (available for iOS 11+) or via a context menu option. Last but not least, several minor but nevertheless important issues have been resolved along the way! 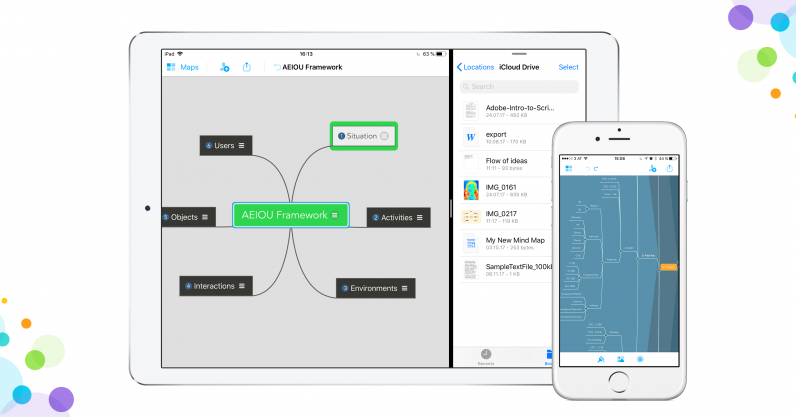 Got a shiny new iPhone X? Well then we’ve got you covered as we’ve upgraded MindMeister to work perfectly on the new flagship device! But that’s not all – aside from some important bug fixes, we’ve added two awesome types of drag & drop support for MindMeister’s mobile app:

Mind mapping on iPad just got a whole lot more convenient, especially for those of you who like to enrich mind maps with images, or insert text from other sources. Using the iPad’s Split View, you can now drag images and text files (the ones that end in .txt) into your mind map and drop them directly onto topics.

If you’re using iOS 11 or higher, you can now move mind maps from one folder to another via drag & drop:

While you’re in your map list, long-tap onto a map thumbnail until the map is selected, then drag & drop it onto a sub folder or onto the link in the top left that leads back to the main menu.

If you’re using an older operating system, don’t worry: You can move maps just as easily, using the context menu. Just long-tap on a map thumbnail until the menu appears, then select ‘Move‘.

Choose one of your folders from the list, then confirm the destination by tapping on ‘Move‘ in the top right corner.

Check out the short demo video below to see the new drag & drop functionality in action (Tip: Watch it in fullscreen view!)