Five years ago today, MeisterTask was released to the public. To celebrate this, I sat down with Meister’s two founders, Michael Hollauf and Till Vollmer, to reflect on the last five years and to dream about the years still to come. 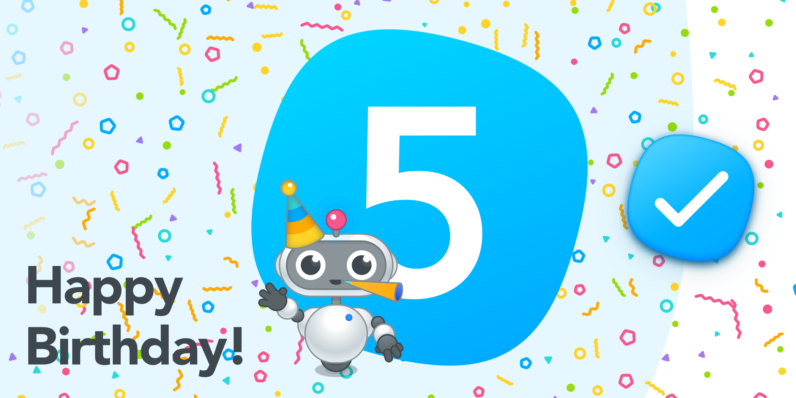 Christina: So, Michael, Till, before we start thinking too hard about what we want to accomplish in the future, let’s review some facts and figures about MeisterTask in the form of a lightning round! I’m going to ask some questions about MeisterTask and see how close you can get to the correct answers. Ready?

Christina: Great, here we go. How many developers were on the original MeisterTask team?

Christina: Till, you are correct. There were two developers on the original team. And how many developers are there now?

Christina: Correct! We currently have 11 developers on the MeisterTask team. Do you know when the first commit was?

Till: About four years, if I remember it right.

Michael: I think less. Three years and one month?

Christina: Right in the middle actually. Between the first commit and release, there were 3.5 years. Do you know how many MeisterTask users we have worldwide?

Michael: I would guess around 2.5 million.

Christina: Well, it’s easy to lose track of this as the number grows so quickly, but Till was quite close. There are 3 million registered MeisterTask users. In how many countries?

Christina: No, more! We have MeisterTask users in 190 countries around the world. Can you guess how many tasks our users have created in MeisterTask’s five-year history?

Michael: I will go with 55 million.

Christina: MeisterTaskers around the world have created 68,321,882 tasks in the past five years. Can you remember the name of your first task in MeisterTask?

Till: I think mine would have been the same!

Christina: Till, your first task was called “new task.”

Till: Ha, well, that makes sense!

Christina: That’s it for the lightning round. I think you both did very well!

Michael: I love that we have 3 million registered users — that is amazing!

Christina: So, now that we’ve covered facts and figures, what have been some of the highlights of the MeisterTask journey so far?

Till: One of the biggest highlights, in the beginning, was MeisterTask being listed as one of the best apps in the iOS store only a few months after we launched the app.

Michael: We were also listed as one of the best apps of 2015 by the Google Chrome Web Store. That was exciting! But for me, a huge highlight was striking a deal with LBBW, a German state bank. Not only because of the deal size, but because it showed that our efforts concerning security and privacy were really paying off and setting us apart from our competitors.

Till: Yes, LBBW is a highlight, for sure. And later on, when we passed the threshold of 50 million created tasks, that was a huge moment for me. I had the feeling in that moment we became a real player in the task management game. And now, I’m just waiting for the 100 million moment. I don’t know when that will happen because I don’t watch the numbers as closely as I did in the beginning. I used to check every day.

Michael: Really? You checked every day?

Till: Yes, sure! Now, I don’t check as often but the numbers still excite me. Also, the launch of MeisterTask 2.0 still stands out in my memory. The developers had done a complete rewrite, all while still launching new features on a regular basis. I was very proud of their accomplishments.

Christina: What was the most surprising thing that happened along the way?

Till: For me, the most surprising thing was really the growth in the DACH (Germany, Austria, Switzerland) region over the past few years. MindMeister has been around for longer and the revenue we see from that is quite stable. But adding MeisterTask to that was really the kicker. And somehow I didn’t see that coming as strongly as it did. At first, we had just 20 influential people in this area, but those people really loved MeisterTask and spread the word for us, and before we knew it, we had lots and lots of users. In the beginning, that was a bit unexpected.

Michael: For me, the surprising thing was that we started with one product — MindMeister. And it became a success. And when you’ve been successful with one product, you always wonder, can you do this again with another? I thought that we could and that we could even bring MeisterTask to a level where it brings in enough revenue to more than pay for itself. Nowadays, MeisterTask makes up a large portion of our revenue. But the surprising thing is that I now meet more and more people who know Meister because of MeisterTask. They may have heard of MindMeister and think it’s nice, but that’s not why they know us. When meeting MeisterTask users, I often find that they are really passionate about the product. It makes them so happy that they want to tell all their friends and colleagues about it.

Christina: That’s true! We can see from social media that MeisterTask users broadcast their love of the product freely. Speaking of passion for the product, what is your favorite MeisterTask feature and why?

Michael: My favorite feature is one that will be coming out in a few short weeks. I don’t want to spoil anything so I won’t get into the details, but I really love it. Besides that, I probably use the comments the most.

Till: I would have to agree with Michael — I also like the new feature the best. I think it brings the most benefit to the individual user. But as far as project planning goes, I like Timeline. It’s visually pleasing and helps a lot with organization.

Christina: Apropos organization — a little birdie told me about a possible plan in the educational and NGO space. Do you have any comments on that or do we have to watch this space?

Christina: Hmm, how cryptic. Where do you see MeisterTask in five more years?

Michael: I see a billboard between the San Francisco airport and downtown San Francisco that reads, “This is how you work together in 2025 — MeisterTask.” I see the whole Meister suite becoming a household name.

Till: I think that is something that we can even say now — that MeisterTask is one of the major players in task management. And by 2025, we’d like to be in the top three.

Christina: What about Meister as a company in five more years?

Till: I think that if we keep the current growth, we could be a company of multiple products with around 500 employees.

Michael: That would definitely be possible!

Michael: Thank you so much for spreading the word about MeisterTask and showing your friends and colleagues how great it is to work with it! Also, stay tuned, we have some really exciting new features lined up for you!

Till: And, of course, make work fun!

Christina Parson is many things: teacher, technical writer, marketing wordsmith, classically trained singer. You can connect with her on LinkedIn.